Helen Edling- Once Upon a Space– the creation of a collaborative microuniverse. 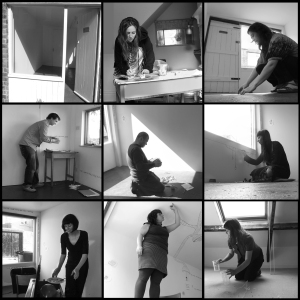 For her residency at 25sg Helen Edling invited 7 artists and writers to take part in a collaborative experimental exchange project.

The project is loosely based on the idea of the Rhizome(*) where a story/micro-universe will be created over a period of 10 days through exchanges between the participants. A picture made by Helen functions as the starting point of the story after which, via words, images and connection points created by the participants, the project will evolve. Continuous non-hierarchical entries and exit points will allow for multiple interpretations and readings with Helen’s drawings in response being the link between the participants.

All events are free and refreshments will be available. Guests are
welcome to bring food and drink to share.

* Rhizome is a philosophical concept developed by Gilles Deleuze and Félix Guattari in their Capitalism and Schizophrenia (1972-1980) project. It is what Deleuze calls an “image of thought,” based on the botanical rhizome, that apprehends multiplicities.

The rhizome is characterized by six principles  – all active simultaneously – described in the introduction chapter of A Thousand Plateaus:

1. Connectivity – the capacity to aggregate by making connections at any point on and within itself.

2. Heterogeneity – the capacity to connect anything with anything other, the linking of unlike elements

3. Multiplicity – consisting of multiple singularities synthesized into a “whole” by relations of exteriority

4. Asignifying rupture – a rhizome may be broken, but it will start up again on one of its old lines, or on new lines

5. Cartography – described by the method of mapping for orientation from any point of entry within a “whole”, rather than by the method of tracing that re-presents an a priori path, base structure or genetic axis

6. Decalcomania – forming through continuous negotiation with its context, constantly adapting by experimentation, thus performing a non-symmetrical active resistance against rigid organization and restriction.

This entry was posted in Artist residency, event. Bookmark the permalink.