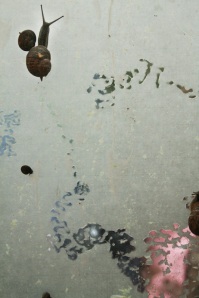 I had never used performance art before, yet I have always been keen to try it realising that my work would definitely benefit from it. I had used snails before in my degree show in the summer of this year but had problems with how to exhibit the works. The snails were essentially the artists and I wanted to show this. Therefore, I exhibited a book that the snails had started to eat on a lectern with the snails in a perspex box on a plinth next to it. Even though the finished pieces looked sleek and professional, the snails seemed trapped and failed to fully inform the viewer how they actually work.

Carole’s house was therefore a lot freer from the boundaries of a gallery space. I met my collaborator, Claire, a very talented artist from South Africa, and after a few discussions we both realised that our work had a lot in common. We wanted to show the power of travelling and the importance of the homing instinct in our performances therefore the snail seemed a perfect link to use. I decided to use Carole’s shed, it was the perfect performance space that seemed to interact with the ‘outside’ so well. I wanted to show how the snails worked together with the paper that was pasted onto the shed windows. 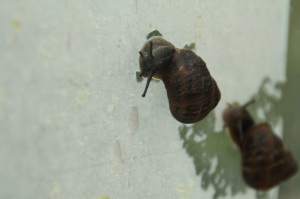 After a few practice runs I felt uneasy about the whole thing, worried that the snails would not make that much of a viewing spectacle that I had previously thought. It was getting colder; therefore the snails were more reluctant to leave their shells. Finding them was also proving tricky! However by the Saturday night I had gathered around 20 of them and decided to leave them unfed until the time of the performance.

Ten minutes before the start I placed them onto the paper that had been absorbing the mashed cucumber. Straight away they started eating. It was fascinating to watch from both perspectives of the window pane. You could see their mouths eating, slowly crawling over the paper and each other in the candlelight. It was fetishist, voyeuristic yet extremely peaceful to watch. Some of the viewers stayed in the shed for a long time, almost transfixed by what they were seeing. It was fantastic getting such positive comments from people about how they never thought snails could be such mesmerising creatures. 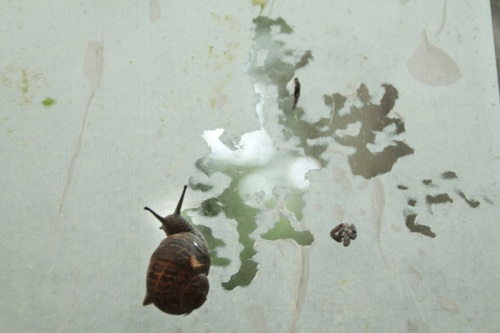 The performance was a great success and went so much better than I had anticipated. I loved the discussion afterwards too; it was so useful to hear the views of people who had observed what I had been doing. I definitely would like to get involved again, I feel that I have grown a little with my personal practice and I have 25 Stratford Grove to thank for it! 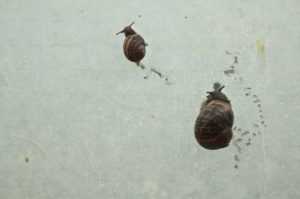 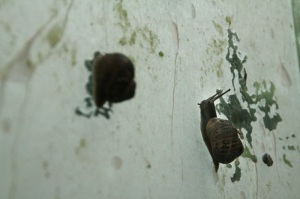 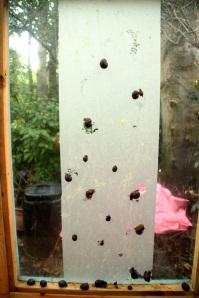